Doug Shaw used to be a top level international assassin. Now retired, on the Isle of Arran, he lives quietly, in luxury. Out of the blue his son, Barry, a high flyer in the world of finance, is arrested for misappropriation of funds and incarcerated.
Coincidentally, Doug’s services are demanded by cold hearted Clive from MI5, the last person Doug ever wanted to work for again.
Doug’s grandson, Andy, aged 13, is a thoughtful lad who gets bullied at school due to his prowess in dance. With his father locked up for embezzlement, Andy is sent to Arran to stay with his grandfather.
Andy is wary of his grandfather, whom he has seldom met, and does not relish the prospect. Doug is minded to toughen up his grandson. However, this is not as straightforward as it seems, for Doug clearly lacks nurturing skills. Not really knowing what to do with the boy, Doug turns to local ne’er-do-wells, Scott and Fraser, to keep an eye on him. Charismatic Scott and his hapless pal quickly lose Andy, with disastrous consequences. Doug is forced to intervene. Can he protect his grandson? Will his own killer instinct kick in?
Set in the very near future, when the Westminster government is more determined than ever to prevent Scottish independence, this short film explores the relationship between grandfather and grandson as they learn to trust and respect one another. Events play out at various island locations, with a combination of comedy and pathos, enticing the audience to explore Arran’s delights for themselves. 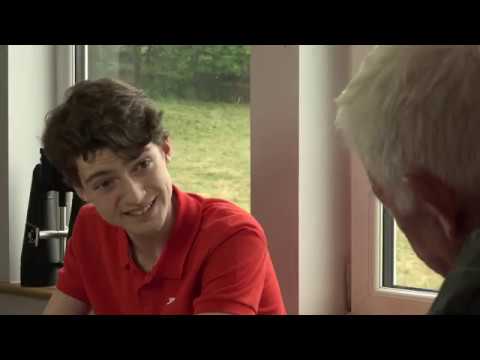